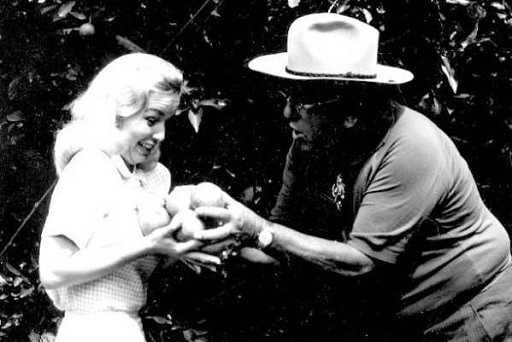 Florida, in the mid-1920s, was the land of opportunity. A fellow could get rich buying and selling land. That’s what drew Lawrence Grant Ferris to western Florida in 1925. He arrived in the nick of time, it seems, before he could invest in land and after the land boom went bust.

He saw another opportunity, however, and the hundreds of acres that he would turn into Ferris Groves were the result. From 1930 until his death in 1975, his groves produces all varieties of oranges, and in the later years, the best strawberries under the Florida sun.

No Ferris leaf from the family tree would be official without a hint of scandal. The Tampa Bay Times ran a story in 2009 the drags Doc into the mystery of a missing mother. Marjorie Adele Moore was divorced, with two children in 1951 Tampa. Mom would take them each night to the Tampa Terrace Hotel, where she was well known at the bar, and then send the children home in a cab.

In the morning, Moore and his sister would get ready for school and tiptoe into their mom’s room to get lunch money. She would always be sleeping. Often she was not alone.

“None of the men seemed to be really long-term,” Moore said. “Except for one: Doc Ferris.”

Lawrence Grant “Doc” Ferris owned 380 acres of orange and grapefruit groves in Citrus County. Though he was married, Moore said, “he seemed to pay a lot of attention to my mom.”

For Moore’s 12th birthday, Ferris bought him a bicycle.

You never forget the guy who gives you your first bike.

Mom packed a bag and vanished at Christmas, 1953.

Moore was 17 when he got the courage to call Doc Ferris. “Remember me? Marjorie Moore’s son? You bought me my first bike.”

The line went silent, Moore said. Then Ferris said firmly, “I don’t know anything about that. Don’t ever call here again.”

A couple of years later, Moore’s sister, Jana, returned to Florida — and booked a room at the Tampa Terrace Hotel. She asked workers, waitresses, everyone: Had they known Marjorie Moore?

The next night, she told her brother, a man knocked at her hotel room. “If you know what’s good for you,” he said, “you’ll quit looking for your mother.”