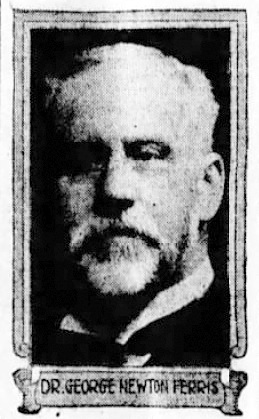 One of the many leaves on the Ferris Family tree belongs to George Newton Ferris (1854-1919). He was the great-great-great-great-great-grandson of Jeffrey Ferris through his son, Peter. The man was of some note in 1880’s Brooklyn, where he practiced medicine and was a community leader.

What caught my attention was a piece from the Brooklyn Eagle dated September 27, 1886. It was a story about conditions at the Flatbush Insane Asylum and the reporter was conducted through the institution by our Dr. Ferris. It was, as you might expect, a horrifying experience.

Dr. Shaw having gone to St. Johnland, his assistant, Dr. Ferris, received the reporter. Dr. Ferris is a broad shouldered, athletic man, of a courteous, kindly disposition and frank in manner. “Dr. Ferris,” said the reporter, “we are informed that the asylum is very much overcrowded, and the EAGLE desires to lay before its readers a plain, truthful account of the present condition of the institution?”

“I will afford the EAGLE every information that lies in my power,” replied Dr. Ferris. “To begin with let me say, that this building when constructed was planned to contain as a maximum 800 patients. Today we have 613 men and 870 women under our care, not including 56 patients who are now at St. Johnland. Making a total of 1,539 patients to be provided for, where there was originally to be intended to be but 800. So today we have 1,433 patients in our care to be literally packed in a space constructed to hold 800.

To watch over these we have only five doctors, fifty-nine male and sixty female nurses. That means that every female nurse has over one hundred patients to attend to, and those familiar with the treatment of insane persons must know what a terrible responsibility that is. So with the male nurses. They, as the figures show, have 100 patients each to look after. The pay of the nurses is but from $14 to $20 a month and their hours of duty from 6 in the morning until 7:30 at night. No wonder the nurses are leaving us all the time and that is is almost impossible to keep good, experienced ones, although I will say that we have some excellent male and female nurses with us today.

But to cap all this we are now obliged, for want of appropriations, to keep and feed this vast army of insane patients at the most incredible sum of 92 cents per capita per week. Of course, we endeavor to get the best we can, but what can be expected to be had for three meals a day at 13 cents per person?”

… I will begin by showing you the worst part of this institution. I will take you into the basement wards, where the troglodyte patients are kept.” Down two flights of steps the reporter followed the doctor. A strong, thick, wooden door, that swung noiselessly upon its hinges, was opened, and as it closed the reporter found himself in a long corridor, at least three feet below the level of the ground. This place has been condemned by grand juries, physicians, visitors and others, but owing to the overcrowded condition of the institution what was originally intended as collars, store rooms, wash houses, and other work rooms, is now the abode of that class of insane persons which the doctor classified as the living dead.

… In this living tomb the reporter saw, both in the mail and female departments, the saddest and most painful forms of dementia. In the men’s wards were the epilopiles, crouching low, with that awful look of dread about them, as if waiting with affright the coming of another fit which would crush them in all its horrid tortures at an unexpected moment. Sixteen beds were stretched upon the stone floor of a bin that would hardly serve six. “We have to put these beds on the floor,” said Dr. Ferris, “because at night these patients are frequently taken with fits and roll off. If the beds were raised they might strike their heads on the stone floor and kill themselves before discovered by one of the three night watchmen, who alone are employed to make the tours of this institution.”

… Now let us go and see what we may term the harmless insane;” and Doctor Ferris led the way up two stories and with the same key opened the strong door that gave admittance to the various wards upon that floor. It was next to impossible to find in some cases here any proof of insanity

, so far as the expression and action of the patients went.

More about the Flatbush Insane Asylum:

GEORGE NEWTON FERRIS MD
George Newton Ferris a medical practitioner of Flatbush Long Island. He was born on the 23d of September 1854 in the interesting village of Tarrytown New York. His father John M. Ferris was born in Albany and was a son of Isaac Ferris, a native of New York City. The great grandfather, John Ferris Sr, was born in Westchester County, New York and traced his ancestry back to England; the first representatives of the family coming from the merrie isle to the new world in the early part of the seventeenth century. A more extended account of the family history is given in connection with the sketch of Rev. J.M. Ferris which appears on another page of this volume. The Doctor enjoyed the educational privileges afforded by Erasmus Hall Academy and further continued his studies in college in Germany and Switzerland and took a special course in 1875-6 in the New York University. He prepared for the practice of medicine in the Long Island College Hospital, completing the regular course in that institution in 1879. He became interne in the Kings County Hospital and the Kings County Insane Asylum for eight years and in 1888 he located in Flatbush where he has been in general practice. He belongs to the Kings County Medical Society. Dr Ferris was married to Miss Katharine M. Hills, a daughter of Chauncy Hills of Delaware, Ohio and resides at No 910 Flatbush Avenue 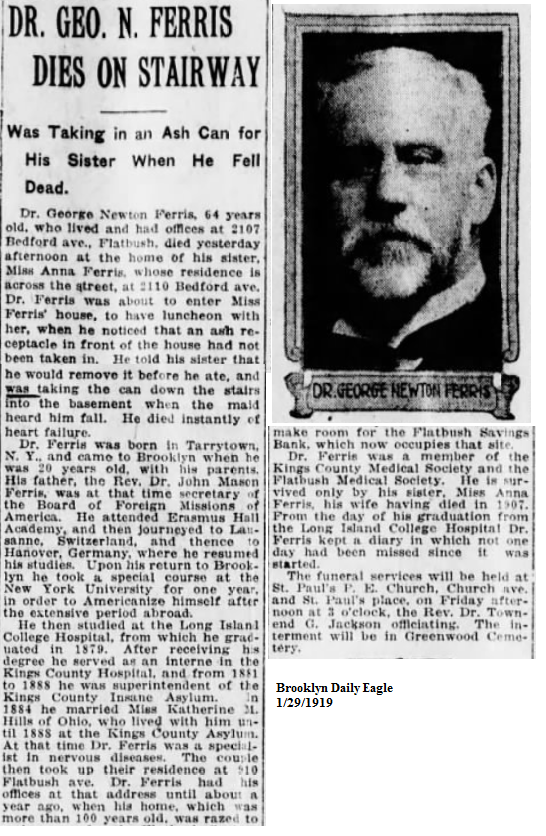