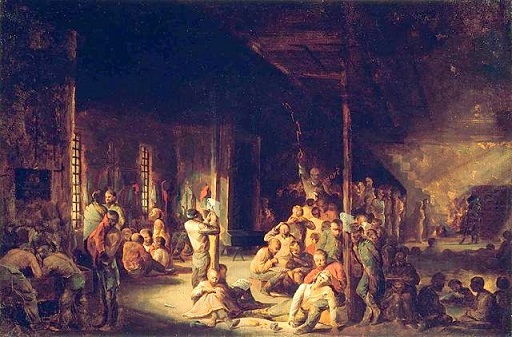 LIbby Prison by David Gilmour Blythe, 1863, from the Museum of Fine Arts in Boston

It is difficult to read but it says that he was born Jun. 14, 1846 and died Mar. 23, 1861. Look at the link to the stone itself. The inscription under his name reads “IN HIS COUNTRY CARE AT LIBBY PRISON”.

The first issue is that he would have been 15 years old if he died in 1861. The second, and equally important issue is that Libby prison did not exist in 1861. It received its first Union prisoners in March

I have been running madly about the Internet to find more information. Libby is one of the Confederate prisons with little documentation. The records were burned when the prison was evacuated in advance of the arrival of Union troops late in the war. However, I did find our Edward in other records.

Service record of Edward Ferris in the Michigan Calvalry

And, based on various sources, he may not have died in Libby. That prison held mostly Union officers. Enlisted prisoners were processed through Libby and then moved to other prisons in the Richmond, Va. area. It is reasonable to believe that for the folks in Michigan Richmond meant Libby.

I rely upon gravestones for one main reason. The family puts up the gravestone. No one knows better than the family the birthday and the date of death for the deceased, as well as how the name is spelled. In this case, however, the stone clearly shows 1861, which was before Edward even enlisted.