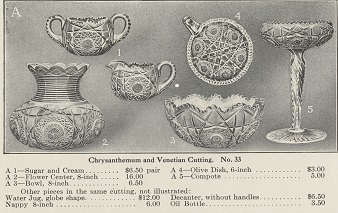 From the Corning Museum of Glass library collection

Corning, New York, is known for glass making and glass crafting. Along with a company that became Corning Inc., the Corning and Elmira areas had a number of small factories that produced glassware for shipment around the globe. The Ferris family, of the Jeffrey Ferris lineage, was actively involved in that work for many years. The company names varied but the most well known one is Ferris Cut Glass. It operated under names such as Elmira Glass Cutting and Elmira Cut Glass.

At the time, cut glass was just that. The piece was poured thick and artists painstakingly cut the designs into the glass, following often proprietary patterns. These were luxury items in most cases and no two pieces were exactly alike due to the need for hand crafting. 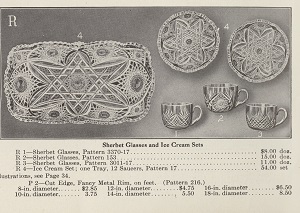 Made for Wanamaker Stores. Image in the Corning Museum of Glass library

The end came for the firm on April 18, 1913. A fire began in piles of excelsior, sawdust and wood chips, used for packing and destroyed the Corning plant. Other businesses nearby, including the Corning Leader, also suffered water damage.