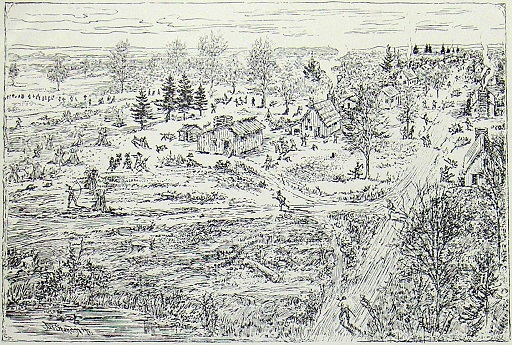 From the 1630s onward, the newly arrived settlers of New England began a series of conflicts with the tribes of Native Americans living in the region. Those conflicts

, large and small, were fought nearly entirely by militiamen and not professional soldiers from the English or Dutch government. Few set piece battles occurred. The wars were mostly tit for tat raids and ambushes, with no quarter given.

I was pretty wound up last night so I spent the time reading about the fighting between the English and Dutch colonists and the Native Americans in New Netherlands, New England and the Maritimes. There are a number of links to the Jeffrey Ferris lineage embedded in these conflicts, and it also proved to be a useful glimpse into the life and times of the people of the era.

The first war to affect the Ferris lineage was the Pequot War. The war was fought in what is now eastern Connecticut and involved all of the Native American tribes in the region

, with some siding with the English colonists.

In 1636, an English expedition attacked the Indians on Block Island, and then removed to a fort in Saybrook. Throughout much of the next year the community and the fort would be under intermittent attack.

The English attacked various Indian settlements during the summer of 1637. By September, 1638, the Pequots had ceased to exist as a tribe. The survivors were enslaved, with some sent to the West Indies while others were given to the Indian allies of the colonists.

Jeffrey Ferris moved to Connecticut sometime between 1635 and 1640. He owned property in Wethersfield in the decade after its founding. The community was attacked by the Pequots in April, 1637.

On April 23, 1637 a large force of Pequot warriors attacked English settlers at Wethersfield on their way to their fields in the Great Meadow along the Connecticut River. The Pequot killed nine men and women and captured two girls who were brought to Pequot territory. 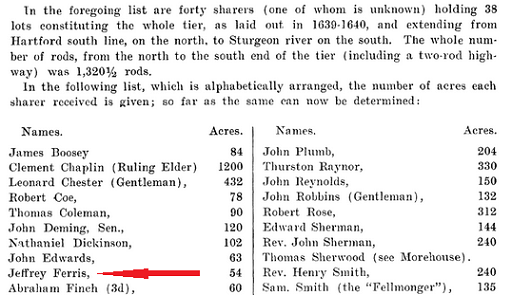 Initial acreage that Jeffrey Ferris owned in Wethersfield, CT, in 1639-1640

The names of the people killed in the Wethersfield massacre are not all known, it appears.

How was Jeffrey Ferris involved in these events? I can’t tell. It’s a topic that I will continue to research.