Like many in the Jeffrey Ferris lineage, it would appear, women with their clothes off came to occupy the thoughts of Sherwood Ferris. At the age of 33, in 1890, he was granted one of several patents for design improvements to the most important ladies undergarment of the day, the corset. He and brother Murry founded the Ferris Brothers Manufacturing Company in 1878 to make ladies underwear. 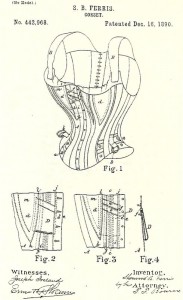 Patent granted Sherwood B. Ferris in 1890 for improvements in corset design 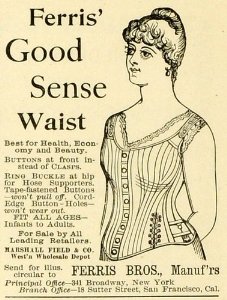 Ferris Brothers was noted for introducing a brand of children’s and women’s waists calle Ferris Good Sense Waists which became a brand name. These waists were considered healthier and more progressive than the traditional waists for girls and young women because they did not cinch in the waistline too tightly and, for the most part, they abandoned the custom of using whale bone or steel stays that actually did harm to developing bodies. The models for girls and women show some indentation but it was much less radical than what people had been used to. This advertising rhyme on a trade card celebrates the famous Ferris corset waist for women and children (both boys and girls). It was dated 1890.

“F stands for FERRIS
Who deserves wide fame
For his great corset waist
And “Good Sense” is its name!

For women and children
The “human form divine,”
He preserves in the beauty
Of its perfect outline.

More on the two brothers: