, I realized that Newton Ferris participated in an unusual way in the Civil War. Newton Ferris, from Ira, NY, served in one NY infantry regiment as an enlisted man. He accepted a direct commission as an officer of the Corps d’Afrique. When that regiment was disbanded, he returned to New York and reenlisted. Captured outside Petersburg, VA, he died from illness in the Salisbury, NC hellhole of a prison camp.

Newton Ferris in the US Census

Newton Ferris was the sixth great-grandson of Jeffrey Ferris through his son, James. 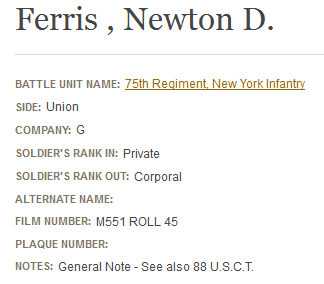 The 75th NY Infantry Regiment was recruited from the Auburn and Cayuga County area. Deployed in Florida and then in Louisiana. National Park Service link

Documents of the Assembly of the State of New York, Volume 35 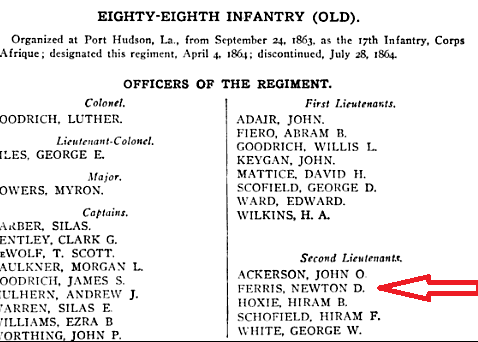 Late summer of 1864, Newton Ferris is reported to have been added to company F of the 111th New York Volunteer Infantry.