James Ferris,1734-1780, and his wife, Charity Thomas Ferris, played no small part in the American Revolution. Living in Throgs Neck, Westchester County (now a neighborhood in the Bronx), the family suffered much and yet, the legends says, worked to spy on the British occupiers and pass the information to General Washington. 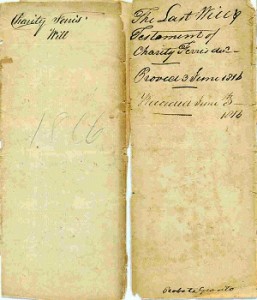 Charity Ferris’ 1807 Will provides documentation about political boundaries, evidence of slavery and the egalitarian sentiment of one Westchester woman during our nation’s founding period.

MARCHING TO THE BATTLE OF WESTCHESTER CREEK
Retracing the Steps of British and American Armies
How Charity Ferris Helped Save Day for the Americans
Reviewing Revolutionary History Amid Beauties of the Bronx.
New York Times July 4, 1915

Story of the Occupation of the Homestead by Lord Howe
from Partial genealogy of the Ferris family
by Charles E. Crowell

The family (James Ferris and family) happened to be at breakfast on the morning of the 12th of October, 1776, when a gun from the British flagship announced the disembarcation of the British troops on Throckmorton’s or Throgg’s Neck; this signal was immediately answered by the enemy’s shipping, which lay at anchor between City Island and Throgg’s Neck. On the next day General Lord Howe, supposing that he had been deceived by his guides and landed upon an island, summoned them before a board of officers. As they entered he struck the table violently with his sword and demanded in a threatening manner how they could dare to deceive him. After a proper explanation had been made he solemnly declared he would hang every one of them unless conducted safe from the present position. The retreat was ultimately affected by a bridge of boats. James Ferris was subsequently captured by the Queen’s Rangers and removed to the New York Provost (the old Sugar House).

I am told James Ferris died February 25, 1780, at the age of 56 ; his wife Charity died July, 1809, aged 75. James Ferris did not die in the old Sugar House, now the site of the Mutual Life Building, New York City, but was brought home with his health ruined for life, and died at his home on Throgg’s Neck three years afterward.

I am also told that Lord Howe occupied the homestead for some time. It is said that during the occupancy of the homestead by Lord Howe that at the first opportunity the daughters were rowed across the sound in the night by a negro slave to their Uncle Floyd’s so as to take them out of harm’s way.

There is no doubt that Charity Ferris, the wife of James, who remained in the homestead during the occupancy of Lord Howe did as much for the American cause as any woman during the Revolution. She was thoroughly loyal and a woman of great ability. She caused a colored boy, one of the slaves of the family, to wait upon Lord Howe and his officers, and instructed him to listen to every word they said, as he was extremely stupid in appearance, no attention was paid to his presence and he was able to repeat many valuable utterances.

Mrs. Ferris taught him to learn what he was to tell by heart, so in case he was searched nothing incriminating could be found. This information so learned was promptly transmitted to General Washington at White Plains and found very useful to him. This slave was in the habit of running errands for the officers to the village to buy things and used to meet there one of Washington’ s aide-de-camp and it became a great source of wonderment to Lord Howe as to how Washington was found usually posted beforehand as to his movements.

It was through the intercession of Charity Ferris that her husband managed to die at home though his sufferings were such in the Sugar House that he survived but a few years.

The areas that comprise Bronx Community Board #10 were once part of the Village of Westchester and before that, the private estates of several families, most notably the Bartow and Pell families. Two significant battles were fought during the American Revolution between British and Colonial forces, in the vicinity of Orchard Beach and Westchester Creek. In the Battles of Westchester Creek and Pell’s Point the advance of British forces was thwarted, allowing Washington’s troops to regroup in White Plains. The Westchester Square area is home to St. Peter’s Episcopal Church, one of the oldest churches in New York City, and one that received its charter from George III, the last ruling British monarch over America. Westchester Square is also home to the Ferris Family Cemetery, with graves dating back to the 16th Century, and the historic Collis P. Huntington Free Library.

From:
The Battle of White Plains

, Howe embarked a large portion of his army in ninety flat-boats, and landed them on Throgg’s Neck, a low peninsula jutting out from the main of Westchester county. He left a sufficient force under Lord Percy to hold the city and guard the British lines toward Harlem. Washington sent Heath to oppose Howe’s landing, and to occupy lower Westchester. After encountering many difficulties from the opposition, Howe finally took post on the heights of New Rochelle, across the road leading to White Plains, where he was joined by General Knyphausen with a freshly arrived corps of German troops. Meanwhile Washington had sent McDougall, with his brigade, four miles beyond Kingsbridge, and a detachment to White Plains.

Also of note is that James and Charity were slaveholders. Both of their wills set out the disposition of their slaves, being freed over a period of time.