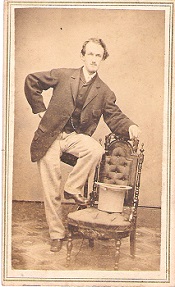 The son of Lindley Ferris and Caroline Murray Ferris, Lindley M. Ferris was an 1856 graduate of Haverford College, in suburban Philadelphia. He married Martha Sands in 1862. As of the 1870 census he and his wife were living in New York City, in the home of his father-in-law. He had a job in shipping (the occupation is only partially legible). 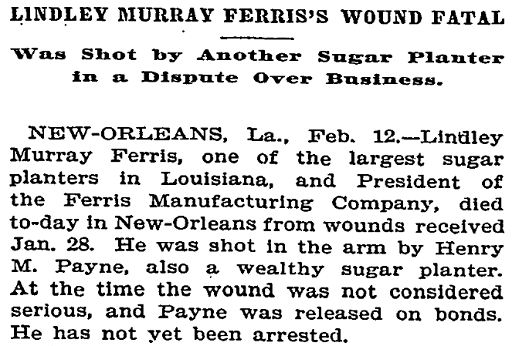 Mr. Ferris did not receive justice. Henry Payne was found not guilty at his trial. The free text provided is nearly illegible but it is clear the piece contains a great deal about the testimony and the argument of the lawyers.
The Times-Picayune, July 19, 1895

At 2 o’clock this morning the jury brought in a verdict of not guilty in the Payne case. The jury was out two hours altogether before they effected an agreement. People hung about the courtroom, awaiting the result with almost breathless anxiety. Women remained in the courtroom until nearly the time for the verdict. Shortly after the Jury went out -the sentiment was canvassed by Jared Sanders and others, and, while a few thought the verdict should be manslaughter, nearly everyone (illegible) and friends stood an the courthouse campus and looked up at the windows of the Jury-room, hoping to catch a word or assurance from conversation of the Jurors. Other scaled the wails to the lower window and hung on the shutters. The district attorney and associate counsel waited in the Judge’s room for the very little while word was sent to the Jury to know if it was ready to report. It returned the information that it had not yet agreed. At 2 o’clock the Jury said it had agreed and came into court. When the verdict ‘of not guilty’ was announced the relatives and friends of Payne embraced him, and there was great rejoicing and congratulation.