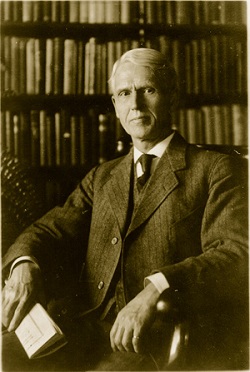 The Ferris family tree that descends from Jeffrey Ferris contains many notable leaves. The Ferris family contains ministers, missionaries, soldiers, heroes and a few villains. As I explore the lineage, however, it is difficult to find a more accomplished Ferris than this man.

Woodbridge had six brothers and sisters. While his father was completely illiterate, he and his siblings were sent to the district school. During the Civil War, his task was to read the newspaper, with the war news, aloud to his father.

After the district school, he attended, for some weeks, the Spencer Academy and the Candor Academy. At the age of 16, he attended a two week teacher’s institute in Waverly and was granted a certificate which would allow him to teach school.

He taught for some months at a district school, while continuing his education at the Owego Academy. In 1872, finding his expenses greater than his income, he set upon a scheme that resulted to increase said income. He began to deliver lectures on phrenology, the “science” of using the bumps on the head to divine a person’s character and future. It proved successful.

Ferris spent a year attending the medical school at the University of Michigan in Ann Arbor. He had no intention of becoming a physician but wanted the knowledge to use in his intended profession of teaching.

In 1874 he returned home and was hired as the principal of Spencer Free Academy. He married Helen F. Gillespie in Fulton, NY. He was often asked to preach at nearby churches including at Van Etten.

He then moved west. Over the course of the next several years, he taught at or helped found a number of small schools which achieved little success. In 1884-1885, he landed in Big Rapids, MI.

In short order, he founded the Ferris Industrial School. The school taught subjects such as English, bookkeeping and shorthand. Any subject that would advance a person might make it to the curriculum, and all were welcome without regard to their current level of education.

The school grew rapidly at the close of the century. It then taught subjects such as chemistry, pharmacy, biology, literature, drawing, shorthand and typewriting. More courses were added, including telegraphy, music and kindergarten. It was now called the Ferris Institute.

In 1963, the school he founded became Ferris State College. In 1987 it was renamed Ferris State University. Go, Bulldogs!

Politics would also interest Woodbridge. In 1892 he was the Democratic candidate for the Ninth Congressional District in Michigan and lost by a very small margin.

In 1904, the Democratic Party nominated Woodbridge Ferris as its candidate for governor, as a unity candidate. He accepted, hoping that it would pour oil on troubled waters. He lost the election.

In 1912, he accepted the nomination again, and was elected by less than 25,000 votes. He was reelected governor in 1914 by about 35,000 votes. During both terms, the Republicans controlled the state legislature and his programs were rarely passed into law.